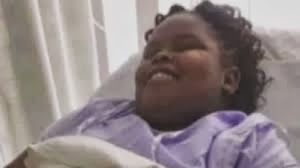 Thirteen-year-old Jahi McMath has been in the forefront of our thoughts in recent weeks, as news reports continue to pour out regarding her condition.

Whether Jahi is able to recover will become clearer in the days to come.  We pray for her, and for her loving family.

But what does the Catholic Church teach about “brain-death”?  When is it permissible to remove life support from a patient?  What care must be maintained?  The National Catholic Bioethics Center has published a helpful guide:

Jahi McMath and Catholic Teaching on Determination of Death

A very tragic case in California has gained national notoriety and prompted debates about the determination of death.  It has been reported that at the beginning of December a 13 year old child, Jahi McMath, underwent surgery for breathing problems that occurred while she slept (sleep apnea).  During the surgery her tonsils and other tissues were removed to enlarge the breathing passages.  As she was recovering in the intensive care unit, she began to bleed profusely.  She was reportedly placed on a ventilator to help doctors stabilize her condition.  The physicians finally came to the medical judgment that she had died.  They used neurological criteria for determining death since her heart was still beating.

Customarily, cardio-pulmonary criteria are used to determine death: the beating heart and the breathing of the patient stop and death is declared.  However, when a patient is on a ventilator the oxygenated blood can enable the heart to continue beating making the patient to appear alive.  Various tests are used to determine death using neurological criteria, including a complete lack of blood flow in the brain, the absence of any electrical activity of the brain, the absence of cranial nerve responses, and the inability of the patient to breathe on her own.  The ability to breathe spontaneously would indicate that the brain stem is not dead, as is in the case of persons in various forms of coma, who are not actually dead.    When the application of these tests confirmed death in the judgement of the physicians, the hospital asked the mother for permission to remove the ventilator from what they now considered to be her daughter’s corpse.  The mother refused, insisting that her daughter was still alive and that the removal of the ventilator would kill her.

The National Catholic Bioethics Center cannot address the accuracy of the facts of the case of Jahi McMath since we have not been a party to the case; but this tragic situation provides an opportunity for the Center to make clear the teaching of the Catholic Church on the question of the determination of death using neurological criteria.  Some media commentators have presented this situation as evidence of the opposition between faith and science since the mother professes to be a devout Christian and believes her daughter can be restored with God’s miraculous intervention.  However, the determination of death by the rigorous application of the neurological criteria is considered legitimate by the Catholic Church, which accepts the findings of science in such a determination.  The Catholic Church does not believe there can be any opposition between faith and science since both are gifts from God, the source of all truth.

In 2000 Pope John Paul II, who will be declared a saint in April, stated the following in an address to an international conference of health care professionals involved in organ transplantation:  “It is a well-known fact that for some time certain scientific approaches to ascertaining death have shifted the emphasis from the traditional cardio-respiratory signs to the so-called ‘neurological’ criterion. Specifically, this consists in establishing, according to clearly defined parameters commonly held by the international scientific community, the complete and irreversible cessation of all brain activity (in the cerebrum, cerebellum, and the brain stem). This is then considered the sign that the individual organism has lost its integrative capacity. . . . Here it can be said that the criterion . . . for ascertaining the fact of death, namely the complete and irreversible cessation of all brain activity, if rigorously applied, does not seem to conflict with the essential elements of a sound anthropology.”

The Catholic Church considers the application of these criteria to be a legitimate means of determining death and has always maintained that it is the competency of the medical profession to declare death.  In his 1957 address to anesthesiologists, Pius XII said: “It remains for the doctor to give a clear and precise definition of death and the moment of death of a patient who passes away . . .” Pope John Paul II said the same in his 2000 Address.  The Ethical and Religious Directives for Catholic Health Care Services, published by the United States Conference of Catholic Bishops, summarizes the continuous teaching of the Catholic Church: “The determination of death should be made by the physician or competent medical authority in accordance with responsible and commonly accepted scientific criteria.”

From news reports it appears that Jahi has been declared dead by physicians repeatedly and rigorously applying the neurological criteria, including an independent court-appointed pediatric neurologist from Stanford University, and that the coroner’s office has issued a death certificate.  If this is accurate, at this point there would be no moral obligation for a hospital or physician to perform any procedure on a corpse such as placing a feeding tube or trying to stabilize the bodily functions that are kept working using mechanical means, as some have argued.  This is a very tragic case but in the face of death, the Church proclaims that Jesus Christ has won the victory over death, and she has the obligation to comfort those who mourn with the sure and certain hope of the resurrection of the dead.  We offer our prayers for all who have been so profoundly affected by this tragic event.