By Christopher Ingraham via WashingtonPost.com

Imagine being 10 years old and being led, along with your 6-year-old sibling, into the backseat of a police cruiser. The police promise to take you home to your parents. It’s only three blocks away, and you know they are searching for you frantically.

But instead of taking you home, the police detain you there, in the car, for three hours, without a meal or access to a restroom. The sun sets, night falls. Eventually the cops take you to a facility maintained by Child Protective Services where you’re kept for another several hours. You still haven’t had any dinner. You aren’t reunited with your parents until 10:30 p.m., nearly six hours after your ordeal began.

Your “crime”? Playing without parental supervision in a park less than a mile from home.

That all actually happened to the Meitiv children of Silver Spring, Md., on Sunday, according to the children’s parents. After a long family road trip, the children went to the neighborhood park with their parents’ permission, with strict instructions to be home by 6 p.m. They never made it, because the cops picked them up along the way after receiving a call from someone who saw the siblings walking down the street together.

The children were detained ostensibly to protect them from the dangers of walking home in a wealthy suburb of D.C. recently rated the “Most Caring Suburb in America” by real estate blog Movoto. But you have to wonder which is worse for a child’s well-being: walking down the street without an adult, or being detained by the cops and family services for nearly six hours?

Fortunately, we have some data to answer that question. The first thing to note is that the overall child mortality rate in the United States has literally never been lower. In 1935, for instance, there were nearly 450 deaths for every 100,000 children aged 1 to 4. Today, there are fewer than 30 deaths for every 100,000 kids in that age group — more than a tenfold decrease. 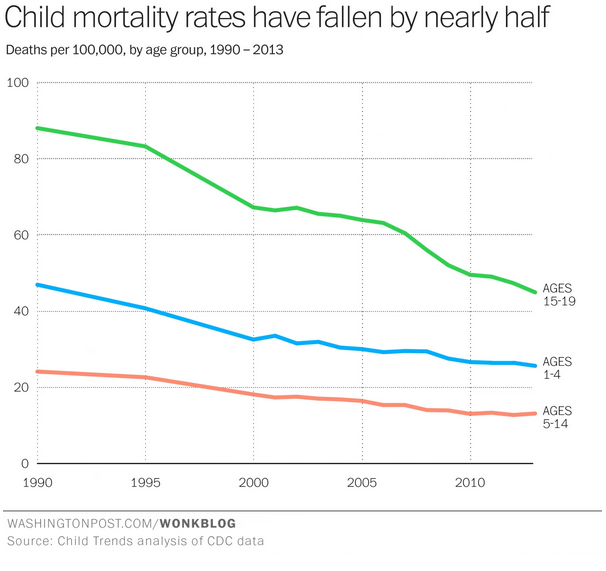 Much of that decline can be attributed to the rise of childhood vaccines (related point: vaccinate your kids!). But mortality rates have continued to drop in recent decades, too, as the chart above shows. Across all three age categories, mortality rates have fallen by nearly half since 1990, according to CDC data tabulated by Child Trends.

But parents typically aren’t thinking about disease or general morality when they fret over unattended kids — we’re worried about all the terrible things that could theoretically happen to a child out on his own. Chief among them is the threat of abduction, or of the child simply disappearing without a trace. 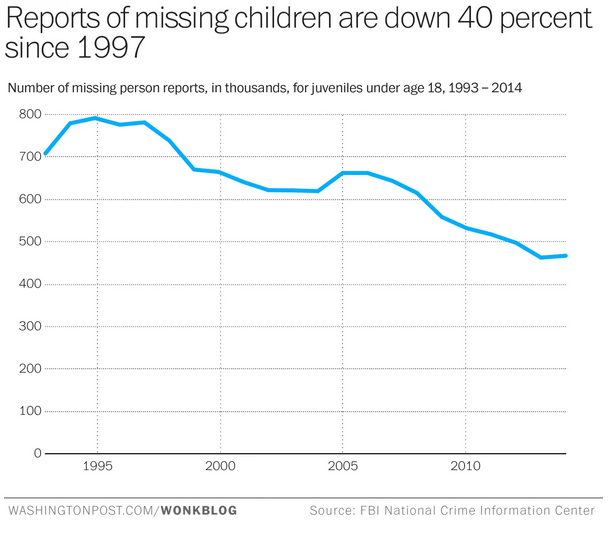 But even these numbers include an awful lot of scenarios that you wouldn’t typically worry about when letting your kid walk to the park. For instance, among all missing persons cases (adults and children) in 2014, roughly 96 percent were runaways — kids or adults deliberately trying to escape a situation at home. In fact, only 0.1 percent of missing persons cases were what we’d think of as a “stereotypical kidnapping” — where a complete stranger tries to abduct somebody and carry them off by force. These figures comport with a more detailed analysis of child-only abductions carried out by the Justice Department in 2002.

Another thing parents worry about when it comes to their kids — traffic. If they’re left to wander on their own outside, won’t they run out in front of a car or get hit by an irresponsible driver? In short: almost certainly not. 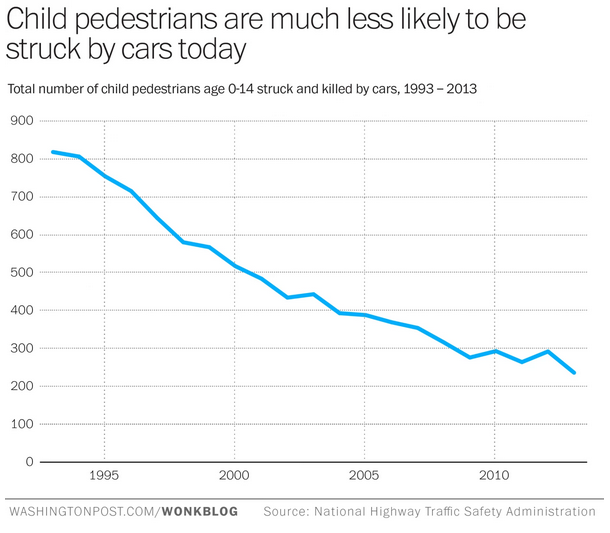 Data from the National Highway Traffic Safety Administration shows that between 1993 and 2013, the number of child pedestrians struck and killed by cars fell by more than two-thirds, from more than 800 deaths to fewer than 250. The number of traffic-related pedestrian injuries in this age group fell by a similar percentage over the same period. Again these are raw numbers, and as the population has grown over that period, the actual rate has fallen even faster.

So where does that leave us in the debate over “free-range” children? Kids are dying less. They’re being killed less. They’re getting hit by cars less. And they’re going missing less frequently, too. The likelihood of any of these scenarios is both historically low and infinitesimally small.
But couldn’t it be the case that kids are less prone to terrible tragedies these days because concerned parents are keeping them locked up at home, and calling the cops whenever they see someone else’s kid walking alone down the street? Probably not.

“It’s hard to say that much of the decline [in mortality and abduction rates] comes from stricter parenting,” said Bryan Caplan, an economist at George Mason University who’s written about child safety statistics.

When it comes to child mortality, “crime and accidents were never that big of a deal to begin with,” he said. And there are a lot of factors driving those trends downward — better safety standards for cars and better pedestrian infrastructure, for instance. Declining rates of violent crime overall also likely play a role.

Asked about the Meitiv’s case, Caplan said, “it’s crazy, people are being persecuted for doing things that are extremely statistically safe just because other people disagree.”

Bottom line: If it was safe enough for you to play unsupervised outside when you were a kid, it’s even safer for your own children to do so today.