Pope Francis’s encyclical on the environment, Laudato Si, was, even before its publication this week, being drawn into the usual partisan divisions. Unfortunate, for multiple reasons, not least because what may be getting lost in sheer controversy is the most important, beautiful, even inspiring dimension of his text, his heartfelt vision of nature as divine Creation: “The entire material universe speaks of God’s love, his boundless affection for us. Soil, water, mountains: everything is, as it were, a caress of God.” [84]

That’s the kind of thing popes – particularly this pope – do best. Their views on science, politics, economics, ecology have some practical value, but their greatest gifts lie in the realm of ultimate values.

In that vein, Francis early confronts a distorted philosophical attitude in our culture since the time of Francis Bacon, who remarked that we should “put nature on the rack. . .for the relief of man’s estate.” Not a very Christian – or even humane – way of thinking about our fellow creatures. Descartes gave us essentially the same: we should become “masters and possessors” of nature. But we are neither. We are stewards, and the only person who can properly be said to “possess” nature is the Creator Himself.

That is the deep vision that animates the pope’s thinking about current environmental issues: if we wish to be wise in pursuit of what is good for our “human ecology,” we need to be concerned about our proper relationship to all creatures and the totality of creation. Genesis, unlike otherworldly religions, affirmed the goodness of the physical world from the outset (and that world’s importance in helping us to know the Creator), even as it denied nature is itself divine.

Secular environmentalists and journalists will ignore it, but the Holy Father emphasizes at several points that an integral part of this vision is that abortion, coercive means of population control, experimentation on embryos, and other offenses against the sanctity of life are part of the very same callous stance towards the natural world that the environmentalists deplore.

That’s a fresh and original point, to be sure, but we can be certain that the main media attention will be focused elsewhere because, it has to be said, when he comes to discussing specific questions – climate change in particular – the Holy Father follows what may fairly be called some of the more extreme environmental views.

One of the presenters at the press conference today in Rome was John Schellnhuber, an atheist German, who has said America must reduce its CO2 emissions to 0 by 2020 (an impossibility), and that we need to reduce global population to the earth’s “carrying capacity” of under 1 billion (which would require outrages against humanity). Francis probably doesn’t countenance that, but he takes it as settled – and urgent – that catastrophic climate change is now underway and the nations of the world, singly and together, need to take drastic steps to reduce global greenhouse gas emissions.

His recommendations include everything from vast reorganization of the global economic order and stringent international agreements on greenhouse gas emissions, to everyday matters such as restricting the spread of air conditioners and adopting a more ascetic lifestyle by people around the world.

What you think of these proposed solutions will depend a great deal on what you think overall of the climate change question. A recent Pew poll found that American Catholics are divided on climate, mostly by identification with political parties: 64 percent of American Catholic Democrats think global warning is a “very serious problem” but only 24 percent of Catholic Republicans agree. Among Catholic Independents, it’s about 50-50.

A lot of journalists have been wondering in the run-up to the encyclical’s release whether it will affect our politics, particularly the 2016 elections. Most people have already settled such questions in their minds and it’s a good bet that the encyclical is unlikely to change them. 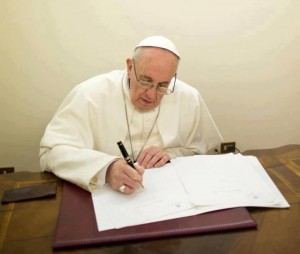 Some Democrats have taunted Republicans for becoming “cafeteria Catholics” on the environment. But this is a red herring. When the Church prohibits abortion, it’s enunciating an absolute moral principle. When a pope criticizes the use of air conditioners or of mercury in gold mining (Francis does both) we are very much in the realm of prudential judgments. And even his larger proposals about global reforms have to operate in a world where efforts to balance differing national interests and outright human needs have made straightforward moral judgments and compromises on international agreements all but impossible.

And Genesis notwithstanding, a little theological idealization appears in the text. Nature as God created it – not as we have sometimes imagined he created it – is not a simple harmony and was never in “balance” as it is often portrayed in ecological texts (and Francis affirms).

Nature shows what one scientist has demonstrated are “discordant harmonies.” We know that earthquakes, tsunamis, plagues, droughts, vast volcanic eruptions, ice ages, rapid climate changes, etc. were all built into our planet’s structure long before human beings ever existed. And continue. Indeed, the existence of “natural” evils has been an argument non-believers often point to as evidence that the world is not the creation of a “good” God.

This mystery of “natural” evil gets little attention in the encyclical, and therefore leads to a somewhat skewed reading of human activity. Far from always being a matter of greed, the development of human technology and even modern industries – unlovely as they sometimes were and are – first sought to deal with remedying scarcity, mitigating the harshness of nature, and meeting basic human needs.

No one now doubts that, left unchecked or unrefined, earlier forms of industry, which we could not anticipate would affect the whole world, cannot continue without doing great harm to nature and the human race. But climate and other ecological problems have arisen not solely from the evil in man, but also from our efforts to deal with nature.

One consequence of taking an idealized view of nature is that it makes it more difficult to address the plight of the global poor, who have been a central concern of all recent popes. Laudato Sirightly points out our obligations to those poor around the globe who would be most severely harmed if significant climate change occurs: peoples living in low-lying areas vulnerable to sea-level rises, those whose water supplies may be disrupted by drier climates or desertification, etc. The whole world would, of course, have moral responsibilities towards protecting and rescuing them.

But the encyclical relatively ignores the much large group of poor, at least 2 ½ billion people on several continents, who simply need development, meaning primarily clean water, electricity, and stable governments that will allow them to improve their lot and deal with whatever nature – or climate change – may throw at them.

There’s much moral denunciation of “finance” and “technology” in the encyclical, much less appreciation of how the efficiencies of markets (properly regulated) and globalization, combined with technical innovation and the entrepreneurial spread of its use, have already lifted hundreds of millions around the world out of age-old misery. And will continue to do so.

Catholic social thought has a tendency to denounce “capitalism” as if all business activity were merely about some pure “logic of markets,” short-term financial gains, and above all greed. Conscientious business people will rightly feel that the one or two paragraphs in the encyclical that concede some value to economic activity may be lost among pages and pages of broad-brush criticism. The world needs many more such conscientious men and women in the economic sphere, both for the sake of the poor and for the environment.

It’s no surprise that the Holy Father has found no complete solution for environmental questions, since no one else has either. But he may have done something even better. Woven into the text is a spirituality of Creation drawn from Romano Guardini, St. JPII, Benedict XVI, and others, that leads us towards us a better way to engage the questions – and to live our lives more fully in this world. That alone is already a great contribution to our human ecology.