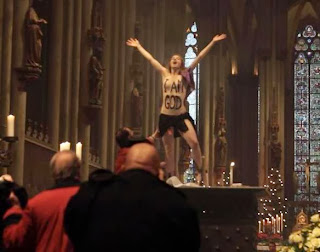 On Christmas Day, as the 10 a.m. high Mass got underway in Germany’s Cologne Cathedral, a young woman in the front row stripped off her coat, exposing her naked body, rushed to the sanctuary and climbed atop the great altar.  Painted across the screaming woman’s bare chest were the words “I AM GOD.”
Josephine Witt, the protestor, was a 20-year-old philosophy student and a member of the feminist anarchist group FEMEN.  Before Cardinal Joachim Meisner could begin the prayers of the Mass, she was quickly apprehended by ushers and guards and by angry worshippers, and whisked away to a waiting police car.  In videos of the disturbance, one man can be seen throwing his coat over Ms. Witt’s exposed breasts before she is dragged from the cathedral.  Another man, an elderly worshipper near the front pew, steps out to slap the screaming woman’s face before returning to his seat.
I’ve written about FEMEN before.  The group, which had its beginnings in 2008, has protested in support of issues including abortion and gay marriage, and opposing Islamism and sharia law.  Their radical viewpoints frequently bring them into conflict with religion.
This time, FEMEN’s objection is with regard to abortion rights.  In an interview with German journalist Fabian Reinbold published in the German weekly newsmagazine Der Spiegel, Witt said:

“I do not consider myself to be God—which, of course, was a provocation.  You should show that we are all responsible for our actions on earth—that no one can forbid any woman to make decisions about their own bodies. This is exactly what Cardinal Joachim Meisner has done, however, by refusing to permit abortions. This is an unworldly approach, which fights against the Femen.”

Challenged by Reinbold to explain why FEMEN protested in a Catholic Church, and why it engages in shock protests which are considered by some to be vulgar, Witt explained:

“We act not against believers, but against the institution [of the Church] and people like [Cardinal] Meisner, which they use to oppress women.”

Witt asserted that FEMEN objects to Cardinal Meisner’s and the Catholic Church’s attitude toward “abortion and pedophilia”—as though the Church opposed the first, but supported the second.
*     *     *     *     *
There are two things which irritate me about the whole shameful event—besides the exhibitionist freak show itself.
By the way, Hans Paul—the head of the paparazzi company which staked out the cathedral to catch Witt’s indecent stunt on film—has ties to America.  A German-born photo lab technician, Paul’s career has included early work on a steamship, in a Venezuelan steel factory, in an Israeli kibbutz, and in a copper mine in Israel’s Negev Desert.  He once hitchhiked across the United States; and in 1998, he established residency in Los Angeles, where he photographed Hollywood stars and other celebrities.  He now lives in Sydney, Australia, but his agency employs photographers worldwide.
Share with Friends: