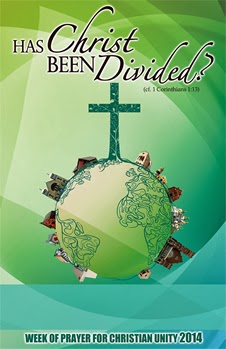 Has Christ Divided Us?

That’s the theme for the 2014 Week of Prayer for Christian Unity, January 18-25, the Octave of Sts. Peter and Paul.  Drawn from 1 Corinthians 1:13, the week is intended to draw believers toward the fulfillment of Jesus’ prayer at the Last Supper “that they all may be one.”

But as we look around, it’s clear that Christ’s prayer has not been fulfilled:  According to Wikipedia, there are now 41,000 Christian denominations.

THAT THEY MAY ALL BE ONE:FROM THE REFORMATION TO CHRISTIAN UNITY

In sixteenth century Germany, an Augustinian friar by the name of Martin Luther became concerned about things he saw happening in the Church. He saw some priests, even some bishops, who were engaged in practices which he considered to be wrong—particularly the sale of indulgences.

And there was, indeed, a moral problem at the time: Corruption had crept into the Church. Pope Leo X had authorized the sale of special “jubilee indulgences” in the cities and principalities of Germany. The indulgences were plenary, meaning that for those who purchased them, all sin and eternal and temporal punishment would be forgiven. Half of the money raised from the sale of indulgences would be used to finance the building of St. Peter’s Basilica in Rome; the other half would be used by the archbishop of Mainz to pay off a loan.

Luther drafted a series of ninety-five statements in Latin—offering his reflections on indulgences, good works, repentance and other topics. The Castle Church in Wittenberg faced the main thoroughfare, and the heavy church door served as a public bulletin board, a place for posting important notices. So it was that on October 31, 1517, Martin Luther nailed his list of “Ninety-Five Theses” to the door of the Castle Church.

UNINTENDED CONSEQUENCES – THE SPLITTING OF THE CHRISTIAN CHURCH

Luther had hoped that his Theses would initiate an academic discussion—not serve as the agenda for a major reform of the Catholic Church.
However, within weeks the Theses were translated into German, then reproduced using the new moveable-type printing press. They were widely circulated through Germany, and soon became a topic for discussion through all of Europe. Three years later, amid the international attention, Luther was excommunicated by the pope and declared a heretic and outlaw. The Reformation had begun.

Just as Martin Luther did not anticipate the huge response his Ninety-Five Theses would receive, he did not foresee the further splintering of Protestantism into some 38,000 Christian denominations (the number reported in the Atlas of World Christianity, published in 2010). If, as Luther’s movement proposed, there is no authority vested in the Church, then there is no reason not to break off and begin a new movement within Christianity; and in less than 500 years, the result has been the splintering of Christ’s Church into ever more movements and denominations. It is a great scandal that Christ’s high priestly prayer to the Father—that we may be one in order that the world will see—has been thwarted.

THE WEEK OF PRAYER FOR CHRISTIAN UNITY:  REVERSING THE TREND TOWARD DIVISION

In 1908 Father Paul Wattson, founder of an Anglican religious community which later became part of the Catholic Church, established a “Week of Prayer for Christian Unity”–a week to pray with our Christian brothers and sisters of other denominations, and to celebrate those areas where we find common ground.  His initiative received the blessing of Pope St. Pius X and was later promoted by Pope Benedict XV, who encouraged its celebration throughout the Catholic Church.

The Second Vatican Council reaffirmed the importance of this quest for unity among followers of Jesus Christ.

Each year the theme of the week is chosen by an ecumenical group representing a different region of the world. This year’s theme, “All shall be changed by the victory of Jesus Christ our Lord,” was selected by the Churches of French Canada.  It is drawn from the First Letter of St. Paul to the Corinthians.

Wednesday, January 18 began the 2012 Week of Prayer for Christian Unity.  Pope Benedict XVI, addressing more than 8,000 pilgrims at the Angelus address in St. Peter’s Square on January 22, called the quest for Christian unity “a common response to the spiritual hunger of our times.” He acknowledged that the division within the community of believers is a great challenge for new evangelization, which may be more fruitful if all Christians proclaim together the truth of the Gospel of Jesus Christ and give a joint response to the spiritual hunger of our times.

Pope Francis, at his weekly General Audience on January 22, spoke about the scandal of division.  The English-language synthesis, read out after the main reflection delivered by Pope Francis in Italian, said,

We know that Christ has not been divided; yet we must sincerely recognize that our communities continue to experience divisions which are a source of scandal and weaken our witness to the Gospel.

In reproaching the Corinthians for their divisions, Paul reminds them to rejoice in the great spiritual gifts which they have received. His words encourage us to rejoice in the gifts God has given to other Christians, gifts which we can receive from them for our enrichment. To be able to do this calls for humility, discernment and constant conversion.