A note from Al:

It’s been a long time coming. But the Boy Scout creed is not specific enough to protect them. If you are not standing on a firm creedal foundation, the waves of this culture will roll right over you. The Boy Scouts fought this for years. Now they are recognizing the inevitable. The only alternative would be for leaders within the movement to break from it and try to start a group grounded in an explicitly Christian creed and to make careful distinctions from the start. – Al Kresta

by Jason Sickles via Yahoo.com 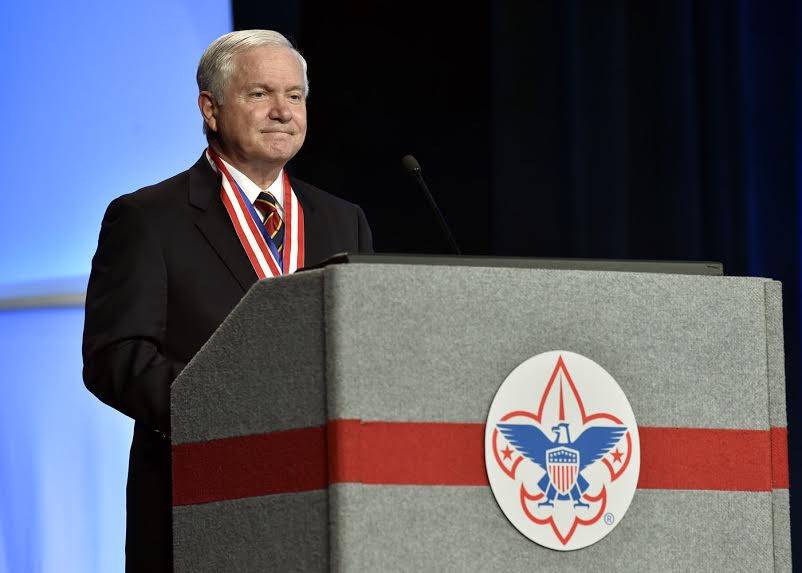 The Boy Scouts of America must reverse its longstanding policy of excluding gay adult leaders or risk unfavorable legal decisions that could doom the historic organization, its president, Robert Gates, warned his group’s national leadership Thursday.

“We must deal with the world as it is, not as we might wish it to be,” said Gates, a former Pentagon and CIA chief. “The status quo in our movement’s membership standards cannot be sustained.”

The 105-year-old organization took no immediate action on a formal policy change, but Gates said he would no longer seek to revoke the charters of chapters that want to defy the ban.

“We cannot ignore growing internal challenges to our current membership policy from some councils,” he said. “Nor can we ignore the social, political and juridical changes taking place in our country — changes taking place at a pace over this past year no one anticipated.”

Gates pointed to recent debates over same-sex marriage and a trend in new state laws that protect employment rights on the basis of sexual orientation.

The former U.S. Secretary of Defense said a legal fight could put the BSA in the same vulnerable position the armed forces faced at the end of “Don’t ask, don’t tell,” a policy that barred openly gay individuals from serving in the military.

“Waiting for the courts is a gamble with huge stakes,” he said. “If we wait for the courts to act, we could end up with a broad ruling that could forbid any kind of membership standard, including our foundational belief in our duty to God and our focus on serving the specific needs of boys.”

Gates’s remarks were welcome news to those who have been challenging the Scouts’ longstanding anti-gay policies.

“While our work won’t be done until we see a full end to their ban on gay adults once and for all, today’s announcement is a significant step in that direction,” Scouts for Equality executive director Zach Wahls said in a statement. “I’m proud to see Dr. Gates charting a course towards full equality in the BSA.”

Two years ago this week, the BSA, one of the country’s largest and oldest youth organizations, decided to break 103 years of tradition by allowing openly gay members into its ranks. The controversial move was approved by more than 60 percent of the approximately 1,400 votes cast by the BSA’s national council. But the Scouts’ ban on gay adult volunteer leaders and paid staff was not reconsidered.

“But, as we have said many times previously, half measures are unacceptable, especially at one of America’s most storied institutions,” HRC president Chad Griffin said in a statement. “It’s time for BSA leaders to show true leadership and embrace a full national policy of inclusion that does not discriminate against anyone because of who they are.”

Thursday’s development is an about-face of sorts for Gates, who said last year that he was opposed to reconsidering the issue of gay adult leaders during his two-year term as the group’s president.

“I had hoped then for a respite during which we could focus on healing our divisions from the 2013 decision, improving our program, strengthening our finances and ending our decline in membership,” he said.

But internal pushback and the current political climate have forced his hand, he said. About 70 percent of scouting units across the country are sponsored by churches acting as charter organizations. Gates told the leaders that he recommends a change in policy allowing the charter partners to establish leadership standards consistent with their faith.

“We must, at all costs, preserve the religious freedom of our church partners to do this,” Gates said. “Our oath calls upon us to do our duty to God and our country. The country is changing, and we are increasingly at odds with the legal landscape.”

The 71-year-old acknowledged that some in the crowd would be angered by his remarks, but he assured them, “I have no hidden agenda.”

“The one thing we cannot do is put our heads in the sand and pretend this challenge will go away or abate,” he said. “I truly fear that any other alternative will be the end of us as a national movement.”

(This story has been updated since it was originally published.)