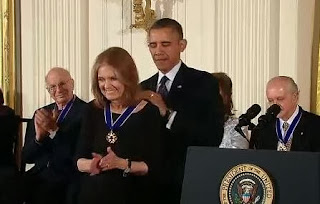 Radical feminist icon Gloria Steinem, who is among the most influential and controversial proponents of abortion in America, last week received the Presidential Medal of Freedom from President Obama.
On November 20, the President presented the Medal of Freedom to sixteen individuals who had, he claimed, by their work enriched the lives of their fellow Americans.  The President stated,

“The Presidential Medal of Freedom goes to men and women who have dedicated their own lives to enriching ours.  This year’s honorees have been blessed with extraordinary talent, but what sets them apart is their gift for sharing that talent with the world.  It will be my honor to present them with a token of our nation’s gratitude.”

Cathy Young, a columnist for RealClearPolitics and contributing editor at Reason magazine, noted that Steinem’s selection has gone largely unchallenged in the media, except for a few charges by far-right and pro-life blogs which focused on her advocacy and abortion rights positions.  Young pointed out that even pro-abortion supporters should have reservations about honoring Steinem.  Young wrote,

Despite her undeniable talent and charisma, Steinem is practically a poster girl for the gender-war paranoia and the ideological dogmatism that have led the women’s movement down such a destructive path.

Writing on RealClearPolitics, Young asserted that Gloria Steinem represents the worst of modern feminism.  To prove her point, Young cited seven features of Steinem’s worldview about which Christians and other conservatives should be concerned:

Dogmatic denial of sex differences.  Young acknowledges the argument that male/female differences are culturally influenced and less important than individual differences.   There is certainly widespread support for the loosening of traditional gender-based restrictions. But Steinem takes the anti-difference view to fanatical extremes of what dissident feminists Daphne Patai and Noretta Koertge have dubbed “biodenial.” In 1997, interviewed for John Stossel’s ABC News special, “Boys and Girls Are Different: Men, Women and the Sex Difference,” Steinem derided scientific research on sex differences in brain functioning as “anti-American crazy thinking.” She also suggested that upper-body strength tests requiring firefighters to lift heavy loads were sexist. What about situations when firefighters have to carry injured or unconscious people out of burning buildings? Steinem insisted, with a straight face, that it was better to drag them, since “there’s less smoke down there.”

Fixation on male villainy. Like many in the sisterhood, Steinem does not let her belief in absolute equality interfere with a focus on men as perpetrators of violence and evil. In theory, she blames “the patriarchy,” asserting that it has robbed men as well as women of full humanity; she has even said (rightly) that we won’t have real equality until we recognize men’s capacity for care and nurture just as we have recognized women’s capacity for strength and achievement. Alas, actual, unreconstructed men usually appear in Steinem’s writings as dangerous brutes.
In her 1992 book, Revolution from Within: A Book of Self-Esteem, Steinem writes, “The most dangerous situation for a woman is not an unknown man in the street, or even the enemy in wartime, but a husband or lover in the isolation of their own home.” She has also touted the long-discredited notion of a long prehistoric period of peaceful, benevolent, egalitarian “gynocentric” societies later displaced by violent, oppressive male rule.

Junk scholarship. Steinem’s talk of peace-loving prehistoric matriarchies is just one example of her penchant for peddling pseudo-scholarly nonsense — often on college campuses, where she is a popular speaker. Thus, in a 1993 speech at Salem State College, Steinem rehashed not only the matriarchy theory but the myth that the witch-hunts in Europe were an effort to exterminate still-existing pagan religion and killed as many as nine million women. She also spun a fanciful “revisionist” history of Joan of Arc as a pagan worshipper who led French armies to victory but was executed as a witch once the war was won because she had grown too powerful. (In fact, Joan, by all available evidence a devout Catholic, was executed for heresy after being taken prisoner in the still-ongoing war.) While Steinem is not an academic, equally shoddy pseudo-scholarship is all too common in women’s studies classrooms.

Misinformation. Steinem’s dissemination of faux facts is not limited to distant history. In Revolution from Within, she asserts that 150,000 women and girls in the United States die from anorexia every year — multiplying the actual number by about 1,000. (As Christina Hoff Sommers documented in her 1994 book, Who Stole Feminism?, the claim of a 150,000 death toll was based on a feminist professor’s mangling of a statistic referring to anorexia sufferers.) The same book discusses an alleged crisis in girls’ self-esteem based on a single shoddy study from the American Association of University Women.

The victimhood cult. In Steinem’s case, the fixation on the sexual victimization of women and girls has led the activist into some strange places, such as the active promotion of “recovered memories” of sexual abuse. E. Sue Bloom’s 1990 book, Secret Survivors: Uncovering Incest and Its Aftereffects in Women, which prominent journalist Joan Acocella termed “one of the most outrageous [recovered memory] manuals,” bore a blurb from Steinem claiming that it could “set millions free” by encouraging them to explore hidden memories of molestation. She is also implicated in a particularly bizarre offshoot of the “recovered memory” movement, the panic over supposedly rampant satanic ritual abuse. In 1993, Ms., the magazine founded by and closely associated with Steinem, ran a lurid piece titled “Surviving the Unbelievable,” a supposed firsthand account by a woman who had grown up in a Satanic cult.) Left-wing critics such as Alexander Cockburn and Debbie Nathan have identified the radical feminist establishment, and Steinem in particular, as major contributors to the ritual abuse hysteria of the 1980s and ’90s.
Ironically, the sexual abuse craze not only pushed untold numbers of women into harmful quack therapies but led to the wrongful imprisonment of a number of female day care workers. Indeed, Steinem personally labored to aid one such persecution — the notorious McMartin preschool case in Manhattan Beach, California in the 1980s. The famous feminist put up funds for an (unsuccessful) excavation effort to find tunnels underneath the school to corroborate the claims of some children — made under the guidance of a rogue therapist — that they had been taken to such tunnels for grotesque sexual rituals.

Contempt for freedom of speech. Steinem was largely responsible for the women’s movement’s embrace of the divisive anti-pornography crusade; but her pro-censorship streak also extends to political expression. Last year, she joined fellow activists Robin Morgan and Jane Fonda (with whom she co-founded the Women’s Media Center) in penning a CNN.com op-ed calling on the FCC to yank the licenses of radio stations that carry Rush Limbaugh’s show, accusing Limbaugh of “toxic, hate-inciting speech” and lamenting that “for 20 years, Limbaugh has hidden behind the First Amendment.” While the trio hilarious claims that its stance “isn’t political,” UCLA constitutional scholar Eugene Volokh noted that they were urging the FCC to curb Limbaugh’s speech “based on the ideology that it expresses [which] is precisely what the Supreme Court has rightly said is impermissible.”

Knee-jerk partisanship. Steinem’s solidarity with women stops at the party line. In 1993, she flew to Texas to campaign against then-Senate candidate Kay Bailey Hutchison, a moderate pro-choice Republican, and slammed her as “a female impersonator.”
Steinem is an undeniably talented and charismatic woman; her message is often couched in appealing terms of female empowerment, freedom, and basic fairness. But in practice, her advocacy promotes far less positive values. This is a Medal of Freedom recipient who has backed attacks on free speech and colluded in the imprisonment of innocent people.

Cathy Young correctly labeled Gloria Steinem as a class war feminist.  The President, if he wanted to honor the feminist movement, should—according to Young—instead have posthumously honored Betty Friedan, author of the groundbreaking The Feminine Mystique.  While one might strongly disagree with Friedan on some issues (such as abortion), at least Betty Friedan—unlike the strident Steinem—warned against embracing anti-male, anti-family ideologies that treat relations between the sexes as class warfare.
Read the rest of Cathy Young’s analysis here.
Share with Friends: