A note from Al:

Most disturbing about this piece is that Irish media refused to follow the money because they wanted what the money was going to buy. They avoided asking tough questions about funding because they thought it would discredit the homosexual marriage movement.  In a talk I give on the need for Catholic media I make just this point. We are living in an era in which many mainstream journalists believe that it is their job to change the world not merely report on it. They no longer believe in the goal of objectivity because they don’t believe it exists. They don’t believe objectivity exists because they don’t think any mind can be objective. They don’t think any mind can be objective because they’ve lost confident that God exists. – Al Kresta 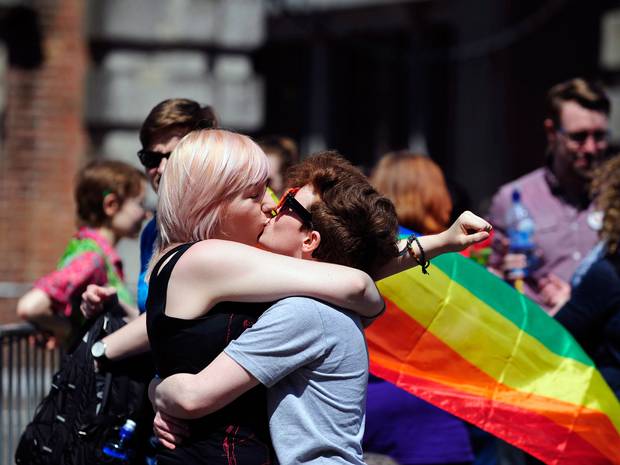 by Victor Gaetan via NCRegister.com

Ireland’s rush to permanently redefine marriage is a startling development for a country that legalized divorce only 20 years ago.

How could the nation that “saved civilization”precipitously decide to make its constitution “gender neutral,” especially in a section devoted to … the family?

Key organizations opposing the radical change believe one answer can be found in the multimillion-dollar external financing program that has quietly poured money into Ireland to fund several homosexual-rights organizations since 2004, especially from U.S.-based Atlantic Philanthropies.

Although not as well known as the Gates Foundation, Atlantic has a similar pedigree: Billionaire businessman Chuck Feeney is giving away the fortune he made as co-founder of DFS, airline duty-free shops.

One of his targets is Ireland, perhaps because his parents were Irish-Catholic Depression-era immigrants to New Jersey, where Feeney was raised.

Between 2004 and 2014, Feeney’s foundation virtually created the gay-rights movement in Ireland, with direct investment of more than $17 million and priceless indirect support, according to Breda O’Brien, a Catholic columnist at The Irish Times, research compiled on the blog Yes Funding Exposed and Atlantic Philanthropies’ own website and reports.

The referendum asked Irish voters on May 22 whether or not to add this language to Article 41 of the Constitution: “Marriage may be contracted in accordance with law by two persons without distinction as to their sex.”

A related group that got Atlantic money, LGBT Diversity, is no longer active.

To do that, Atlantic awarded multi-year grants, funded staff positions for organizations that, if they existed, had relied on volunteers and brought in international advisers.

For example, 10 years ago, GLEN was a volunteer organization with one paid employee, concentrating on HIV/AIDs prevention.

According to “Catalyzing LGBT Equality,” GLEN’s “multi-year grant from Atlantic enabled them to ramp up their work into a full-time highly professionalized lobbying machine.”

O’Brien wrote a scathing piece in The Irish Times on May 6, with the tame title “Asking Questions About Funding for Referendum Campaign,” although the subhead, “Groupthink has been exalted to an Irish sacrament,” was penned by the author.

O’Brien pointed out that while the Irish press is normally highly critical of foreign funding for domestic initiatives, Atlantic Philanthropies received no criticism or scrutiny.

She called GLEN “the most successful lobby group in Irish history.”

O’Brien suggested that her fellow Irish citizens had convinced themselves the “Yes” campaign was the work of a grassroots movement “because if we admitted that it is instead a slick, elite movement of highly educated professionals funded from abroad we might have to admit we were skillfully manipulated.”

She concluded, “Can American money buy an Irish referendum? Let’s wait and see.”

Following O’Brien, “No” campaigners incorporated a critique of Atlantic Philanthropies’ role into their materials.

KeepMarriage.org called Feeney’s $17 million in funding the No. 1 fact out of “Four Things Yes Campaigners Really Don’t Want You to Know.”

Local chapters of Mothers and Fathers Matter, a leading organization opposing the constitutional rewrite, put out a press release on May 15 calling the Irish media’s indifference to Atlantic Philanthropies as a prominent bankroller “a form of corruption.”

The blog “Yes Funding Exposed: How to Buy an Irish Referendum” sprang up earlier this month.

On May 11, the blog explained it “demonstrates how private interests in Ireland and abroad are, through spending millions promoting one side, distorting the democratic process and potentially changing the course of Ireland’s social history.”

A week ago, “Yes Funding Exposed” pointed to a pattern by which non-LGBT organizations, financed by Atlantic Philanthropies, endorsed the “Yes” campaign, a tactic that represented a potent indirect form of support for constitutional change.

The Immigrant Council of Ireland, for example, received almost $9 million from Atlantic between 2003 and 2014.

Earlier this month, the council called for a “Yes” vote on the referendum. As a result, Atlantic Philanthropies publicly lauded the Immigrant Council for its stand.

But the revelations about Feeney and his deep pockets came late in the game.

And other foreign entities also contributed to the “Yes” cause (albeit in smaller amounts), including the Ford Foundation, the British Council, the Kingdom of the Netherlands, the European Commission and California-based Urgent Action Fund for Women’s Human Rights.

Incredibly, what got more media attention was a purported link between the largely volunteer “No” campaigners and the U.S.-based National Organization for Marriage (NOM).

“US Christians ‘bankrolling’ No campaign in Ireland’s gay-marriage referendum,” declared a May 16 headline in the British newspaper The Guardian.

However, the only supportive action by NOM described in the article was this: “It has urged evangelical Christians to visit KeepMarriage.org, which is campaigning for a No vote.”

A NOM spokesman explained to The Guardian that Irish law bars foreign donations from flowing into the country to influence the outcome of referendums.

Indeed, the Mothers and Fathers Matter website makes clear it cannot accept foreign donations because “You must be a resident in Ireland or a citizen of Ireland to donate to political activities in Ireland.”

Writing for Crisis magazine on May 15, C-FAM President Austin Ruse confirms the Irish “No” campaign got no financial support from American organizations, because “U.S. marriage money largely dried up after the courts hijacked the issue.”

Ruse pointed out the Catholic Church in Ireland did not provide a moral compass for the debate.

Rather, Ruse wrote, “[A]nother thing the Irish faux-marriage campaigners have going for them is the Catholic Church, which is the perfect punching bag and much of it deserved.”

“The Church lost credibility over sex scandals and therefore may have had a negative impact on the current debate,” he added.

The Church did not take an overt stand with regard to the Irish marriage-definition referendum.

A spokeswoman for Archbishop Diarmuid Martin of Dublin told the Irish Times on Wednesday it was not the archbishop’s policy “to tell others how to vote except to stress that, given the importance of marriage and the family, decisions should not be taken lightly and that people should be informed of what is involved.”

Although the May 16 Guardian article was misleading regarding foreign support for those opposed to constitutional change, it was on target when it observed, “A Yes vote would also mark yet another defeat for the Catholic Church and the political power it used to wield in Ireland.”

On May 23, as many “No” campaigners were conceding defeat in the referendum, the Catholic, pro-marriage group Iona Institute tweeted Mothers and Fathers Matter spokeswoman Eileen King’s message on Irish TV: “We were up against buzzwords and money.”