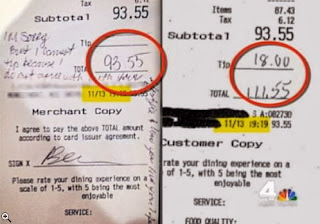 Last week the Internet was abuzz over the story of a gay server at a restaurant in Bridgewater, New Jersey, who claimed that a customer denied her a tip and wrote her a hateful note on the receipt.
Dayna Morales, a former Marine who works as a waitress at Gallop Asian Bistro, told the Huffington Postthat a family had left no tip on their $93 bill, and instead scribbled a line through the receipt with a note which read, “I’m sorry but I cannot tip because I do not agree with your lifestyle.”
Morales posted a photo of the receipt on-line and sent an angry email to Have a Gay Day, a pro-homosexuality organization.  Morales’ email, which was was later posted to the site’s Facebook page, read:

I am THOROUGHLY offended mad pissed off and hurt that THIS is what her kids will grow up learning and that I served in the Marines to keep ignorant people like them free. Sorry lady but I don’t agree with YOUR lifestyle and the way you’re raising your kids but you didn’t see me throwing that in your face and giving you shitty service. Keep your damn mouth shut and pray we never cross paths again.

Readers, offended by the customer’s blatant prejudice against homosexuals, sent checks and monetary gifts as a sign of solidarity against the kind of prejudice Morales had faced.  To date, Morales has received more than $3,000 from people who oppose discrimination on the basis of sexual orientation.
But not so fast!  After the story aired on NBC New York, a family contacted the station to report that it was their bill which Morales had posted—only it had been altered, they did leave a tip, and they did not write a message of hate on the bill.  As evidence, they produced their copy of the receipt which showed a large tip, and which had the same date/time stamp and dollar amount as the receipt Morales had posted on social media.
According to NBC New York:

The husband and wife, who asked to remain anonymous, showed NBC 4 New York a receipt that appeared to be printed at the same minute, on the same date, for the same $93.55 total, except with an $18 tip.

They also provided a document they said was a Visa bill, which appears to indicate their card was charged for the meal plus the tip, for a total of $111.55.

The couple told NBC 4 New York that they believed their receipt was used for a hoax. The wife says she is left-handed and could not have made the slash in the tip line, which she said looks to be drawn from the right.

“We’ve never not left a tip when someone gave good service, and we would never leave a note like that,” the wife said.

Gallop Asian Bistro has no explanation for the discrepancy, and is now investigating the incident.  Dayne Morales stands by her story.  She is still waitressing at the restaurant, and pledges to donate all the funds she’s received to help support the Wounded Warrior Project.
Share with Friends: