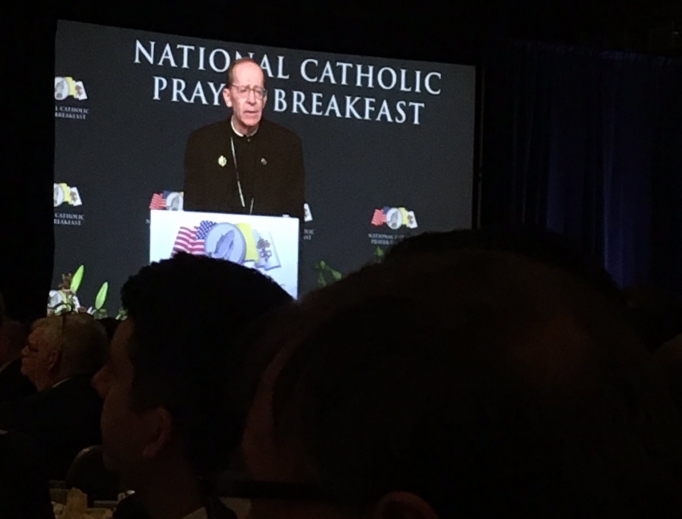 Bishop Thomas Olmsted of the Diocese of Phoenix had a clear message Tuesday for the faithful who are frustrated over the sexual-abuse scandals in the Church and distrustful of authority, based on assertions like those made by former apostolic nuncio Archbishop Carlo Maria Viganò that sexual abuse and immorality were tolerated at the highest levels in the Vatican.

Following his address at the National Catholic Prayer Breakfast in Washington April 23, Bishop Olmsted told the Register that there were a couple of important things for the laity to keep in mind during these troubled times.

“The first thing we need to remember is that Jesus came for sinners, and so his mercy is stronger than our weakness,” he emphasized.

In his speech at the prayer breakfast, Bishop Olmsted asked the faithful to pray for their bishops and priests, so that they will have the strength to do what is needed in response to the crisis.

“Your concerns are just and need to be answered with both sacrifice and actions that are wiser than despair,” he began, asking the laity to “please pray for us, your shepherds, that we might act with radical trust in the grace of the Risen Christ to bear any burden that comes from offering healing for the victims, honestly naming the evil, clearly defending inconvenient truths of the Gospel, and exercising decisive leadership in Christ’s name.”

He said that the bishops “owe” these actions not just to the laity, but to Christ, in light of the sexual-abuse revelations and cover-ups.

“We bishops owe this to you, and, more importantly, we owe this to the Lord himself, nothing less,” he concluded, adding, “As one called by Christ to be a shepherd in these times, I also owe you and the Lord clarity in my teaching.”

Bishop Olmsted highlighted some Church teachings that are unpopular in today’s culture. He said Catholics must continue to speak out on these matters, which, he said, are threatened by “the current heresy which is embodied in the sexual revolution and, now in its radicalized version, the gender ideology, as Pope Francis calls it.”

In the past, Pope Francis has defined “gender ideology” as a form of “ideological colonization” taking place “in Europe, America, Latin America, Africa and in some countries of Asia.”

“Today children — children! — are taught in school that everyone can choose his or her sex,” Pope Francis said of the implementation of this ideology. “Why are they teaching this? Because the books are provided by the persons and institutions that give you money.”

Bishop Olmsted said that this heresy targets “two beautiful but demanding and sometimes inconvenient realities: marriage and the child.”

“Marriage stands now in the way of the gender ideology,” he warned, adding that “its further weakening will do nothing to strengthen our great country. We Christians, then, must stand up for this reality of marriage today in our homes and in the public square, despite the real risk of persecution for doing so.”

The bishop went on to argue that in today’s culture “the child is also targeted,” and he pointed to the opposition to recent legislation aimed at protecting infants born after a failed abortion attempt. “Look at the vociferous opposition to the Born-Alive Abortion Survivors Protection Act,” he said, asking: “Where does this blatant disregard for a child’s life come from? A hardened heart.”

“A child needs love, and love costs, and the human heart must be prepared to pay the cost of love when the child arrives,” he added. “Christ calls us to stand up for each child.”

As the Register recently reported, the bill is facing fierce opposition from Democrats both on Capitol Hill and in state legislatures. The measure mandates that doctors use “the same degree of professional skill, care and diligence to preserve the life and health” of a child born alive after an abortion attempt as “any other child born alive at the same gestational age.”

“We will stand up every time that human life is threatened,” then-Pope John Paul II said. “When the sacredness of life before birth is attacked, we will stand up and proclaim that no one ever has the authority to destroy unborn life.”

St. John Paul II went on to address the importance of marriage and the family in that speech. “When a child is described as a burden or is looked upon only as a means to satisfy an emotional need, we will stand up and insist that every child is a unique and unrepeatable gift of God, with the right to a loving and united family,” he said. “When the institution of marriage is abandoned to human selfishness or reduced to a temporary, conditional arrangement that can easily be terminated, we will stand up and affirm the indissolubility of the marriage bond.”

Bishop Olmsted also stressed the importance of the faithful witnessing to the beauty of marriage and family in his closing message, which was particularly aimed at families.

“You, heads of our domestic churches, the smallest and most vital cell of Church and society, you have as your primary responsibility to be all in for sacramental marriage vows,” he said. “This entails an extraordinary openness to the gift of new human life.”